HOUSTON — The addition of a sidewalk next to 1,600 feet of a southwest Houston drainage ditch won’t rival the construction of NRG Stadium or the Sam Houston Tollway. But for students and other pedestrians in one of the most diverse parts of the dynamic city, it will mean safety, convenience and improved access to schools, residences, businesses and other destinations.

With the Houston Independent School District’s Wisdom High School and Pilgrim Academy nearby, 63 percent of the people who used the path were students and the remainder were adults.

The 8-feet-wide sidewalks along the ditch (officially known as the W-142 Channel), will connect Beverly Hill Street on the north and Windswept Lane on the south, a few blocks east of Hillcroft Avenue.

“Enhancing the quality of life in our redevelopment zone through infrastructure projects like this one is our mission and duty as well as a rewarding way to serve the public as volunteer board members,” said Redevelopment Authority / TIRZ 1 Chairman Bill Hutz.

Pollard, who provided $50,000 for the sidewalk, has been a strong supporter of the project since being elected. He has worked closely with TIRZ 1 and is excited that construction is beginning, especially knowing that it will benefit so many people.

Construction is taking place on the property of the Harris County Flood Control District through an interlock agreement and the cooperation of the City of Houston. 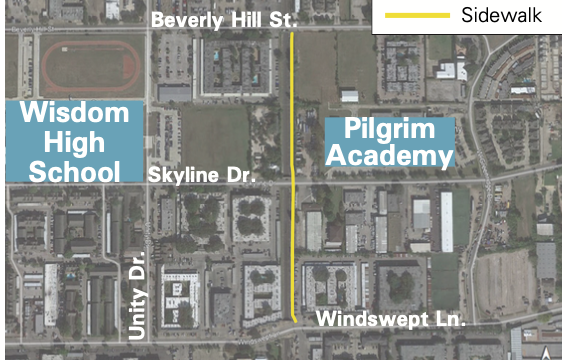